The Trigger: The EXPLOSIVE book by David Icke

Quite simply the most EXPLOSIVE book of modern times (and then some). If you think David Icke has gone beyond the cutting edge before (and he has MANY times) – well strap in for this one.

You are holding a book that those it exposes never thought would ever be written in the modern climate of systematic and extraordinary censorship.

But David Icke has never been one to follow other people’s rules and impositions or bow to intimidation no matter what the source. He believes that with freedom being deleted by the day that someone has to have the courage to call out those transforming human society into a global prison camp in which only the ‘right’ opinions and information are allowed.

The central theme of The Trigger is what happened on 9/11 and the force that was really behind those attacks – no, not 19 ‘Islamic extremists’ who somehow flew wide-bodied jets with fantastic skill while being dubbed incompetent by flying instructors in one-engine ‘puddle-jumpers’.

The Trigger, however, is not only about 9/11. In exposing the network that orchestrated and covered-up those horrific attacks Icke reveals the force that is dictating your life in increasingly fine detail and leading the world along a dark and dangerous road to total Orwellian global control.

The book is written in two distinct, but fundamentally connected parts, and together they represent perhaps the most controversial book of modern times – and long before that – given the ever-gathering climate of mass oppression, censorship and freedom deletion. David Icke has had the courage to write it. 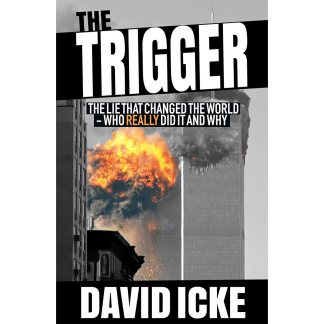 You're viewing: The Trigger: The EXPLOSIVE book by David Icke $20.00
Add to cart
X