David Icke marks his 20th year of uncovering astounding secrets and suppressed information with this eight-hour presentation before 2,500 people at London’s Brixton Academy in May 2010.

He takes the manipulation of the human race and the nature of reality to still new levels of understanding and he calls for humanity to rise from its knees and take back the world from the sinister network of families and non-human entities that covertly controls us from cradle to grave.

David has moved the global cutting edge so many times since his incredible ‘awakening’ in 1990 and here he does it again – and then some.

His most staggering revelation is that the Earth and the collective human mind is manipulated from the Moon, which, he says, is now a ‘heavenly body’ but an artificial construct – a gigantic ‘spacecraft’ (probably a hollowed-out ‘planetoid’) – which is home to the extraterrestrial group that has been manipulating humanity for aeons.

This is eight hours that will change your thinking, your perception of self and the world. and thus your life. 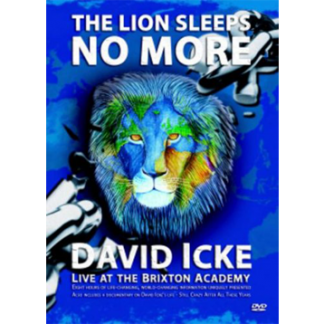 You're viewing: The Lion Sleeps No More – David Icke Live at the Brixton Academy £5.99
Add to basket
X