Buy Gareth Icke’s book ‘How Not To Be A Rockstar’ and Gareth’s albums ‘3’ and ‘A Brand New Battle’, for only 10 pounds.

Gareth Icke – How Not To Be A Rockstar

How NOT to be a Rock Star tells the extraordinary few years of Gareth Icke’s life on the road with his band Kody.

From witnessing murders and being accused of terrorism, to amputation and break ins; this band saw it all, drank it all, and lived to tell the tale.

This insight into the hearts, minds and memories of a young band doing what they do is both eye wateringly funny and ultimately worrying.

Sometimes, stories have to be heard to be believed and trust me, this book is full of them.

I should know, I was there at the time and I still can’t believe some of the stuff we saw!

Sit back, grab yourself a drink, and welcome to our World.

Gareth Icke’s Second Album including Remember Who You Are, What’s Love Without Meaning.

“Gareth Icke is a talented young singer/songwriter who writes well crafted songs of deep intelligence and sensitivity who has been making a name for himself on the grass roots circuit.” John Robb, Louder Than War

“This man has the world in his hands, and I for one wouldn’t count him out of world domination, he is that good.” Sonic Observer 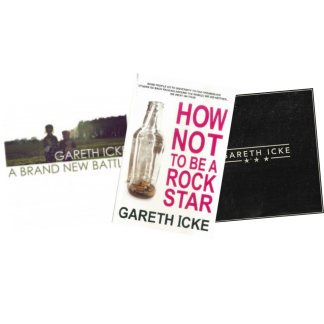